I am not done gushing over the beauty and wonder that is the cover of THE WAR ON ALL FRONTS but I wanted to spend some time with the cover of MAN UP, my debut that released in April, 2020.

Again, Erica Weisz from Trism Books designed it. She had asked me for images, themes, and anything that stood out about the book that might help her design the cover. I don’t remember much of what I told her but I know whatever I said did nothing to contribute to the cover we ended up going with. 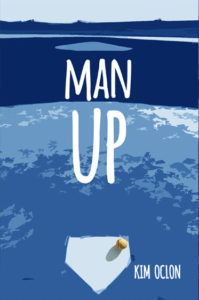 As you can tell from both covers, Erica does a lot with very little. MAN UP’s cover is pretty much a view of a baseball diamond from behind homeplate that seems go on and on into the distance. The first design was more realistic with green grass and brown sand but it was the baseball that stood out to me. Erica has always utilized mixed media and I LOVED how it was a real baseball on this drawn field. And then she, somehow, decided to make the cover two tone blue instead of using more natural tones and I was blown away. Why was it blue? I’m not sure but WOW! And still, that real little baseball was on homeplate. There’s even a shadow. Again, the shadow that is doing so much.

I have no idea how Erica took my jumble of words to create the cover she did for MAN UP and then did it again for THE WAR ON ALL FRONTS. I’m not gifted in the visual arts. Thank goodness for the talented people who are.